Optional Soundtrack for this One

It was Pentecost Sunday this past weekend, and in the story of the first Pentecost, Peter speaks of a day when sons and daughters will prophesy, the young see visions, and the old dream dreams.

I heard this well-beloved story this year in the church where I became an Episcopalian, St. James in the City on Wilshire Boulevard in Los Angeles, and this year it particularly hit close to home. I’m not prepared to say I’ve had visions in my life, but Los Angeles was where I learned how to dream, and how to turn my dreams into reality, starting with Amelia, and if we’re talking about prophesying, L.A. is where I conceived of what my life could be and realized the plan for getting there. 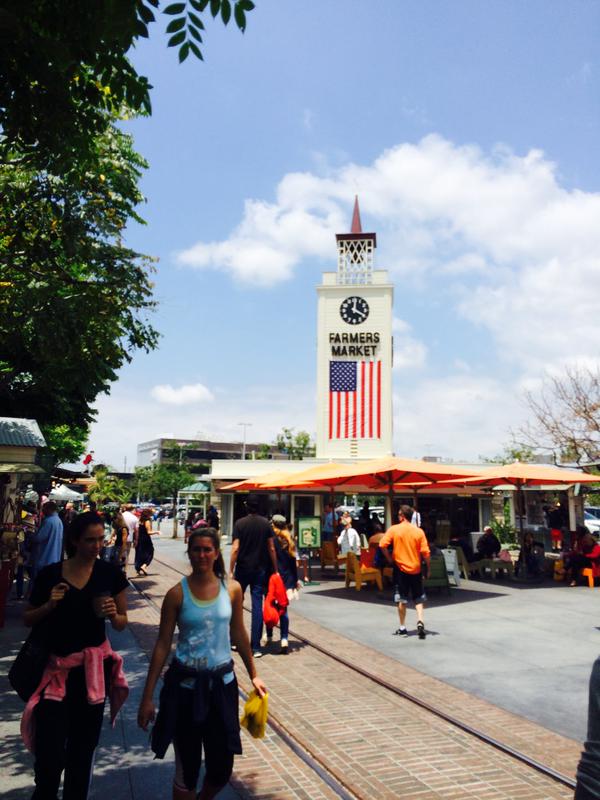 Also where I ate a lot of great breakfasts.

My relationship with Los Angeles has been a love-hate one. Some of the finest people in the world live there, several of whom happen to work for my publishers, Boom! Studios. It is a city of excellent weather filled with little treasures: the beaches of Santa Monica and Venice, the Farmer’s Marker, the architectural marvels of the residential areas and some establishments, and the thrill of jogging down Sunset Boulevard at 6:30 am when the city is just waking up, passing Book Soup and the Chateau Marmont and the Rainbow and old skyscrapers, and the billboards trumpeting Pixar movies, Grace Helbig and Hannah Hart, and my mother’s favorite television shows. However, Los Angeles is also a sprawling, overcrowded land that is too big for its own good, and it is ultimately a company town where the company deals in unreality…the genuine sides of L.A. can be hard to find. But they are out there. And I was fortunate enough to see some of them this year.

I go to Los Angeles to combine business and pleasure. Pleasure in the vacation aspects. Business in that my career is reaching a point where spending time with certaipeople and talking about the future is important.

I stayed this year with a great friend of mine who happens to be 87 years old…we met through the St. James book club and men’s group. He is a man who has lived all around the world but considers Los Angeles his one true home, and still resides in a house a block off Melrose that his family has owned since the 1930s. My friend went through serious health issues this year, involving cancer and a broken hip, and in all his insistence I come stay with him he neglected to tell me he now has caregivers 24 hours a day. Thankfully they were all terrific people, and even more thankfully, not only did we get to attend that Pentecostal service together, but we also had plenty of time to talk about our pasts, about religion, about wartime and other countries and the general quirkiness and lessons learned of life. I am grateful to have him as a friend.

However, he was the second person I encountered on my trip. The first was Whitney Leopard, my exceptional new editor. Whitney’s life is one aspiring comics people should use as a model: she began as an intern and worked her way up to her current position. I had known her when she was starting out, but this was our initial face-to-face contact in our new working relationship. And after a long dinner talking about our lives and about my future projects, my earlier suspicions that I was in the best of hands were confirmed. Whitney is going to push me into new and exciting directions with my writing, and the results are going to be remarkable.

My trip began and ended with meetings. For the past two years I have collaborated with RJ Ryan, who co-wrote the acclaimed graphic novels Syndrome and The Joyners in 3-D, on a screenplay. Mr. Ryan (who is currently preparing an ambitious epic of a new graphic novel for release, and whose zines you should definitely check out) and I met up with some associates of his to talk about getting this film off the page. I often get a surreal feeling in Los Angeles, and this was one of the most surreal moments of my recent life. I graduated eight years ago with a film degree and thought I had left it behind, yet here I was talking to people of experience about how to launch a production, sitting on a Sunset Boulevard patio while homeless people and young women bumming cigarettes walked by. 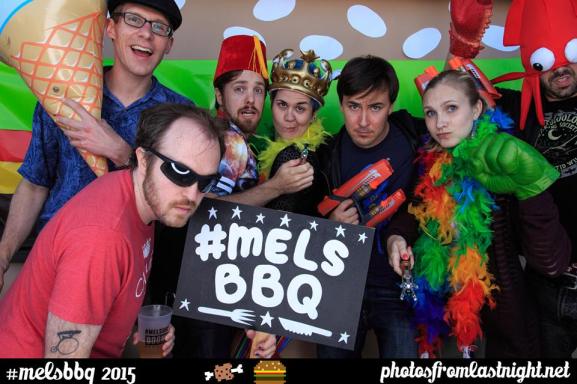 This is what I get into when I go to Los Angeles.

And of course there was #MelsBBQ which you might have been aware of on twitter. Mel Caylo, Boom!’s marketing director, hosts one of the largest Memorial Day weekend parties of them all and comics/nerd culture people come from around the country (no exaggeration) to eat, drink, and be merry. My experience this year included an hour volunteering on grilling duty under the direction of Mel himself and Grant Imahara. (I’m not making that up.) It’s an extraordinary gathering, and the only drawback was that there were so many people to see and the lines were so long that I didn’t eat enough food, and the combination of sweat and a couple drinks with friends led me to need a nap as soon as the affair was over. That said, it is a great event and one I look forward to attending again in the future. 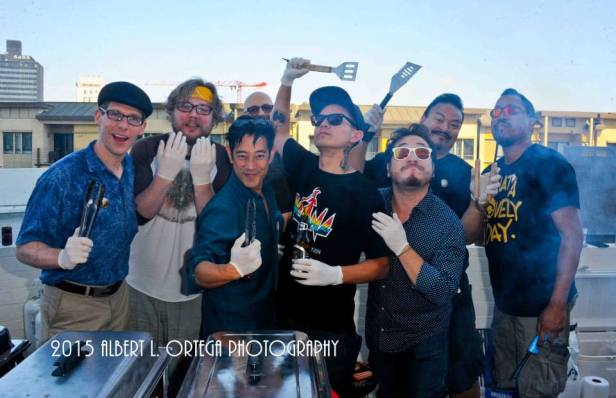 As I mentioned, there are a lot of people I ran into at Mel’s, and I’m going to spotlight some friends who I hope you might choose to follow on twitter.

–Jackson Lanzing and Collin Kelly are two of the nicest men in the comics world, and they will be giving us two incredible new series this year, Hacktivist and Joy Ride. Collin is a newer friend, but I first met Jackson some years ago with the outstanding manager David Server, who does sterling work for Archetype. Jackson and Collin’s significant others, Alex Klimavich (who recently appeared on Jackie Kashian’s podcast) and Amanda Powers, are just as fantastic.

-Whitney is representative of a very high standard of editors. Boom! definitely has assembled the equivalent of the 1927 Yankees for their editorial staff. Whitney couldn’t attend the barbecue due to representing Boom! at Denver Comic-Con, although I was privileged to meet her twin sister Kara, an incredible designer. But I got to speak to many of her fellow editors, including Bryce Carlson (who pulls double duty by also writing the terrific 1950s LA noir saga Hit), Cameron Chittock, my wonderful fellow northeast Ohioan who also lives and dies by Cleveland sports (which means I loved the man from the start, and seeing the work he helps produce only increases that respect), and Shannon Watters, the mastermind of the Boom! Box line which is producing some of the most unique and innovative comics on the market (I’ll be writing an entire post on my favorite titles from Boom! Box soon), and is thus someone I tremendously admire. I also got to meet Shannon’s S.O. Carolyn Yates, who co-edits the very important website Autostraddle. (Which could use your help.)

-Speaking of editors, my editor for the past three years, Rebecca Taylor, was also in attendance. Tay has had such a dramatic impact on my career that she will also one day have a post dedicated just to her. She recently moved over to DC to take her childhood dream job of editing the Batman titles, and one of the best things about this weekend was being able to talk with her about all the things friends talk about (such as commiserating about apartment hunting) rather than how to fix page 89 (although we did fix page 89!).

-And just because I’m a writer myself doesn’t mean I can’t be a fan. It was adrenaline-pumping to say hello again to my Boom! stablemates Noelle Stevenson (Lumberjanes) and James Tynion IV (The Woods), whose titles are absolute musts. James passed along some sage advice: that a writer should find the comic they would love to write for the rest of their lives and find a way to get it made.

-I also met up with more writers, Buzzfeed managers, and the actress Rileah Vanderbilt, who graciously and heroically worked the bar all afternoon.

All in all, I’ll be back, and I’ll be eating more next time.

But Los Angeles has more to it than business. So much of the time was spent with friends I hadn’t seen in years, especially the old Emersonians. I spent a glorious day in Ojai, a country made for epic landscapes and teeming nature, staying with the writer Emily Steers, who is one of the most important influences on my life and a woman I can never say a bad thing about, and David Edwards, the incredible composer who walked me through the scoring process for movie trailers before the three of us (and the dogs) settled down to Super Smash Brothers and Emily passing along vital information about what states and countries make the best wine, the value of art, and how to listen to music on the Internet (use iTunes Radio). It was one of the most relaxing days I have spent in years and I cannot thank them enough. (And you can get lots of Emily’s best vital information on her twitter feed.)

I had cocktails on Saturday afternoon in Silver Lake at the Black Cat (highly recommended) and went comic-shopping at Secret Headquarters (ditto) with Fred Shannon and Bianca Naylor, two of the most passionate people I know (who also tipped me off to using Lyft, which was a major help), and then returned to the Americana at Brand, my old workplace in Glendale, for a Chinese dumpling dinner with Chris and Karin Faiella, two of my oldest and best friends, who have found great success as a writer and a designer.

I spent some good time on Sunday with Matt Murphy, a prince of a man who understood my getting too tuckered out at the day’s end, and woke up Monday for an amazing breakfast at the Blue Jam (check out the steak hash) and a visit to LACMA (home of a gorgeous exhibit on the Hudson River School and the remarkable Metropolis II) with Jesse Clemens, my old bookselling partner in crime and a poet and academic who will make a name for himself.

And I got a ride to the airport, plus breakfast at a Googie-style diner, with Dave Child, one of the funniest men to walk the planet, who had just gotten in from Omaha the midnight before playing a comedy festival and trying out his Tom Waits impression. He deserves a 21-gun salute.

Finally, I spent a relaxing Monday afternoon lunching and strolling the Santa Monica beach with Stephen Christy, the man who got me into comics in the first place. Stephen and I graduated from Emerson together in 2007, and our friendship was founded in part on a mutual determination to build the lives we wanted for ourselves. You read my life story on this blog and in my comics. His story is more exceptional and has yet to be told. But right now, there is something special in being so close to someone who understands the path you have walked because they have walked it themselves, and as we gazed out onto the mountains of Malibu and beyond, the weight of bad jobs and break-ups and financial struggles felt like nothing.

We have visions and dream dreams and that overpowers everything.