During my first visit to my alma mater, Emerson College, the head of the film department peppered me with questions about my writerly ambitions and among the many pieces of advice he gave me was this: “You should read some of Anthony Trollope’s books. That man knew how to write for movies before there was such a thing as movies.” 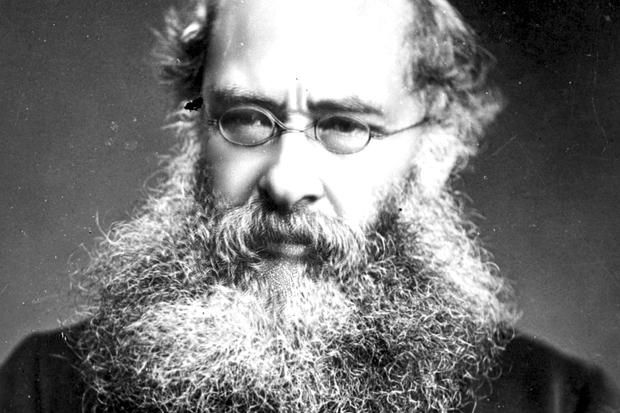 It took me three tries to get through a Trollope novel, with Can You Forgive Her? (a book Stephen King thought could have been titled Can You Possibly Finish It?) being the one I finally cracked. This would be the start of a lifelong journey. I now have two shelves on my bookcase filled with nothing but books by and about Anthony Trollope, who turns 200 today. I’ve never read more by a writer, written more about a writer (during my year in grad school I wrote my master’s thesis and two other papers on Trollope), or been so inspired by a writer.

I’ll also be the first to acknowledge that, while many of his books are thankfully still in print and his reputation has only grown in the past decades, Trollope can be a foreboding proposition. He is one of the eminent Victorian novelists, but he has little in common with the grandiosity of Charles Dickens, the sharp-tongued satire of William Makepeace Thackeray (who was Trollope’s own hero), or the tragic nature of Thomas Hardy. He comes closest to George Eliot, who said several times that Middlemarch owed a debt to Trollope, but even Eliot had a poetic spirit in her that Trollope lacked.

Trollope was the realist of realists, the English-speaking Balzac or Tolstoy, a man who filled his novels with masses of detail external and internal, to the point where readers could close the covers after 800 pages and realize that not very much happened. The length is not the only obstacle. His books are peppered with references to current events and classical quotations that need footnotes, and above all, his novels were almost all linked together in the same fictional universe, with characters and plots carrying over between books. His greatest achievements are the six-volume Chronicles of Barsetshire and ANOTHER six-book series, the Palliser Novels, based around a supporting character in the fifth Barsetshire book. Knowing you have to read five other novels to fully appreciate one is an understandable turn-off…yet I have to say that Framley Parsonage and The Eustace Diamonds, two of the most outstanding novels I’ve ever read, only get better when placed in the sequence. Further, his stand-alone works (which are still linked to his grander narrative) are not quite as good. His most celebrated story, The Way We Live Now, is half-visionary masterpiece, half-some of his weakest romantic plotting (he was a Victorian, after all, and multiple love stories dominate each book) taking up way too much space in place of really interesting ideas, plus a tinge of anti-Semitism. He Knew He Was Right and The American Senator are his finest stand-alones, but they’re also two of his longest.

To finish it off, Trollope’s style can come across today as excessively strange. He was firmly planted in the social ethos of 19th-Century Britain, and his books are dominated by a deeply felt Christian morality—the entire Barsetshire series concerns itself with the duties of clergymen, but this morality is best expressed in his treatment of women. He shows elaborate concern for “proper” female behavior, and the only person he laughs at more than a feminist is an American feminist.

Yet I love this writer.

Anthony Trollope had a gift that all the great writers possess, but few in so acute form: the ability to depict human beings in all our psychological complexity. His novels lack the one-note supporting characters of Dickens or clear-cut heroes and villains to root for. All his characters have great and terrible traits alike, and Trollope makes it clear to his audiences why they are all equally worthy of praise and blame. Resolutions do not come easily (although they do come) and the conflicts are recognizable and relatable to our own existence, for Trollope understood the importance of money, vocation, and the day-to-day struggle of life for rich and poor alike, and wrote about these issues brilliantly. Trollope’s sympathy for his characters also counteracted his chauvinist streak, as the women in his novels are often brilliant, daring, strong-willed, and almost in spite of the author depicted as equal to his men. (That first Trollope novel of mine, Can You Forgive Her?, is also the strongest of several books with LGBT-leaning plotting, which in its case made sense. Trollope had a long, happy marriage to his wife Rose Heseltine, but also nursed a passion (which at that time was at its height) for the bisexual American feminist Kate Field. Never let it be said that the Victorians were boring!)

Trollope also had an astute understanding of politics, which is the central theme of the Palliser novels. Many of his complaints about how people win and hold offices are still on the nose, but more importantly, he had a political theory, expressed in many of these books, that I have adopted in real life. Trollope described himself, with the same realism found in his novels, as “an advanced conservative liberal.” (This was also the view of his great altar ego, Plantagenet Palliser.) He was not naïve enough to think that class differences and the power structure could be eliminated overnight. He believed there was a ruling class, and that there was much in culture and practice for any society that needed to be preserved and kept safe from reform. At the same time, he believed that

Trollope’s personal and political philosophies were huge influences on me, but it is his writing ability that has most touched my life. The Emerson professor was absolutely right about Trollope’s plotting: for books where not a lot happens, these stories are perfectly paced and structured, with the multiple plotlines given appropriate space and perfectly interacting with each other. He continually reminds me to do the hard work of creating realistic characters with goals, flaws, and a perpetual sense of empathy. And above all, discovering more about Trollope’s life gave me my sense of discipline. Most of his career as an author coincided with long service for the national post office, and he would rise every day at 5:30 without fail to write. If he finished a book or short story and there was still time left, he would move on to the next tale. This commitment paid off for him, obviously, and it is now starting to pay off for me…it is a model every writer should adapt.

Finally, Trollope was hilarious. His writing style borders on the postmodern with frequent authorial intrusion and digression, and his ultra-opinionated narrative voice often produces a chuckle. (My favorite Trollope anecdote, which is characteristic of his narrative style, is that at a banquet someone made a long, tedious speech about a subject, and Trollope leaped up and yelled “I disagree with you entirely! What was it you said?”) Some of his scenes, characters, and chapter titles are uproariously funny, in part due to Victorian phrasing and humor, in part due to his own inward sense of mirth.

Anthony Trollope’s legacy lives on two hundred years after his birth and is stronger than ever. This year, the final Palliser novel, his valedictory, poetic rumination on the passing age, The Duke’s Children, was restored to its original manuscript length with the return of 65,000 words Trollope had been forced to edit out. The thought of a longer text is one that excites beyond words.

So with my emotions in mind, I wish Anthony Trollope a very happy birthday. I’ll be tweeting my favorite Trollope chapter titles all day today, so I urge people to give a look and respond with favorites of their own.