I love Kurtis Weibe’s Rat Queens, as any right-thinking comics fan should. When Rat Queens underwent its first artist shift following Roc Upchurch’s rightful dismissal, I started following Upchurch’s replacement, Stejpan Sejic, on twitter. Sejic left after only a few issues due to illness but I kept following him, and I saw that many of his posts related to a giant project called Sunstone. I didn’t know what exactly happened in Sunstone, but the art was beautiful and…intriguing.

Sunstone is now available in five volumes from Image/Top Cow that collect the entire self-contained story and set up new stories focusing on the supporting characters. I can’t recommend these volumes enough. Sunstone is an extraordinary book, both a work of art and a signpost for where comics are going.

One of the effects of an expanded comics creatorship/readership due to new, accessible platforms (webcomics) and demand for diversification has been a renaissance in some genres, romance being one of them. Sunstone is a shining example. The book tells the story of Ally, a successful technology consultant, and Lisa, an up-and-coming writer working at a diner. Ally and Lisa meet in an online chatroom and become friends. Then they meet in real life and become friends with benefits. Then they fall in love…and have no idea what to do about it.

The gay element is now what makes Sunstone special; indeed, one of the story’s most refreshing features is that apart from Ally and Lisa each initially pondering what it is to be attracted to a woman after spending their lives dating men, their lesbianism is never a major concern for the plot or characters. What makes this story special is how extraordinarily relatable it is. Under most circumstances, love does not come into our lives easily: we approach with caution, we’re too fearful to take a leap, we’re afflicted with self-doubts and jealousies and sending signals while missing the signals we get sent…and all the while correctly guessing that all of these pains are worth the reward. Sejic, with a realism SO real it borders on painful in its relatability, captures the psychology of falling in love as well as any writer who ever lived, and may be in the top percent of all time. Even knowing how the story ends—and the ending is made clear in volume one—doesn’t make this side of it easier to take. 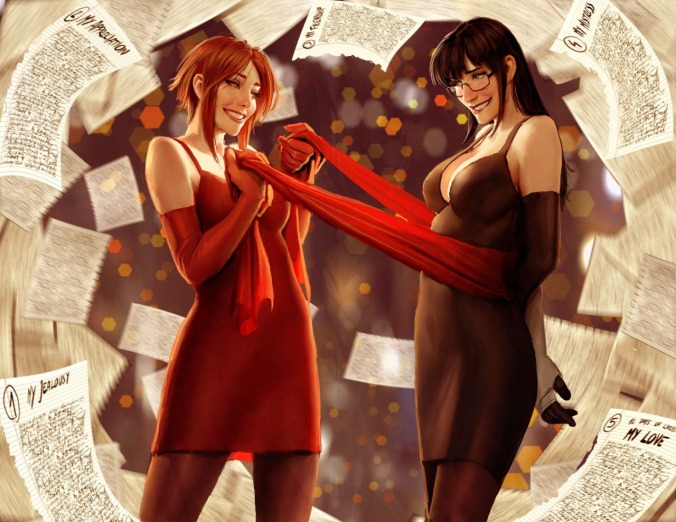 There are moments in Sunstone when Ally and Lisa are fretting over their emotions that are comparable to the most striking scenes from The Office: I cringed and wanted to put the book down because I had been there and thought these things about people I was mad for or at least strongly attracted to. Indeed, the second half of volume four is almost unreadable because it’s so darned wrenching. It’s rare for any writer, in comics, film, or prose, to be so effective; to write so well that one can’t take it. That Sejic tells the story on a tight timescale—the action takes place over three months in the five volumes—adds to the drama and allows him to focus on exploring all the nuances of crucial scenes.

Sejic’s brilliance in this vein allows me to overlook his shortcomings. It makes me feel better as a critic that he himself points out flaws he worked to correct in the afterwords. Even still, there are more passages in Sunstone than one would ask for in which characters discourse at length, hitting the same beats over and over, on what might be called “the philosophy of sex.” He’ll repeat dialogue almost verbatim pages apart. Some of the supporting characters come and go, their thematic significance either quickly abandoned or suddenly introduced. And occasionally, the dialogue makes zero sense.

However, thankfully, most of these criticisms do not apply to Ally and Lisa, two of the most fully-developed characters I’ve found in comics. And the care Sejic takes in creating an excellent supporting cast makes up for occasional flaws in presentation. The friends and family of our heroines are as lovable, if not more so in two cases. Sejic creates the two best friends we all want to have in our life. Ally’s oldest and dearest friend (and onetime sexual partner) Alan is a sterling example of the wisecracker who can lighten any situation, will occasionally annoy you, but always has your back. And Anne, who gets introduced in volume two and became my favorite character very quickly, is a marvel: a vulnerable and charming woman with a sardonic sense of humor who’s also strong enough to tell people she cares about the truth. I slowed down my reading whenever Alan and Anne appeared, and it makes me excited that Mercy, the second part of this saga, is their own love story.

I’ve talked long enough about the storytelling, which I have some qualms with, and now I must say something about the art, which is nearly flawless. Sejic’s linework is occasionally and effectively jagged, and always impressionistic, evocative, and rich in detail. His coloring is dramatic, with intense reds and blacks (the colors of Lisa and Ally’s hair) standing out against lighter backgrounds and working with high drama in darker ones. He finds imaginative ways to play with borders and panels, occasionally doing away with the latter altogether. Finally, for a story dependent on its characters, I’ve found few artists who draw the human face as well as Sejic. Truly, you could read Sunstone without any dialogue and be able to follow the plot. Every single expression tells the reader what they need to know without words. Artists should study Sejic to learn visual storytelling and character design from a master.

WHAT SUNSTONE ALSO IS

I’m a bit proud right now; I wanted to be able to write about Sunstone at length without mentioning the “big thing” in the book, the thing that makes it, by Sejic’s own admission, almost unable to be written about by mainstream reviewers or put on display in stores.

All five volumes are full of lovingly and intricately drawn depictions of sex that should only be seen by mature audiences.

The only people I might not recommend Sunstone to are those who would get a bit squeamish by the graphic side of its subject. Otherwise, anyone who loves great comics, great love stories, and innovative artistry should read it. 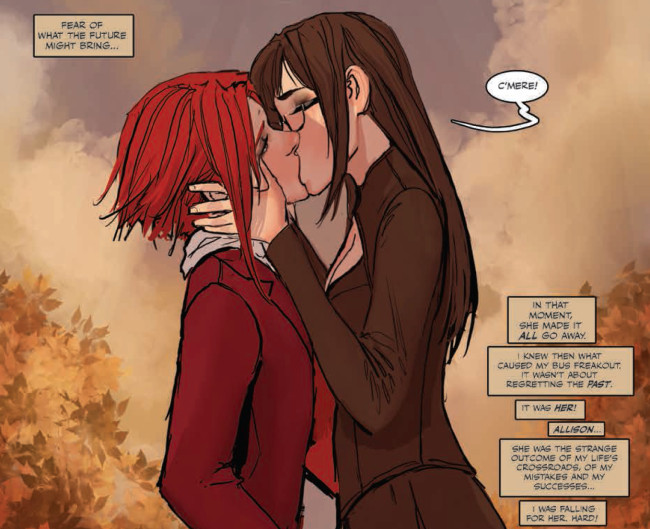 All words and pictures by Mr. Sejic. Follow the story in the books and at http://shiniez.deviantart.com.