I begin this long-overdue essay on an airplane full of families, traveling from Chicago to New York clearly having left, or going towards, a spot of the same purpose, the mothers lovely and modest, the fathers wearing yarmulkes and carrying Borsalino hat boxes, the children rambunctious. It is the sort of situation that John Allison could make enterprising sport of and make it well.

John Allison is the English writer of the long-running web comic series Bad Machinery/Scary-Go-Round. In 2011, during a self-described “crisis of confidence,” Allison created a potential new series entitled Giant Days and self-published an issue. The story was a hit, two more issues followed, and in 2015 Boom! (my own publishers in the matter of full disclosure) picked Giant Days up as a six-issue miniseries. Again, response surpassed expectations and the run was doubled to twelve…which necessitated the hiring of a new artist as Allison’s collaborator, Disney storyboarder Lissa Treiman, was unable to continue due to other projects. This halfway point of the Boom! Box series seems a good point to talk about Giant Days, because I happen to think it is the finest monthly title in comics right now and moreover a book that people can learn from. 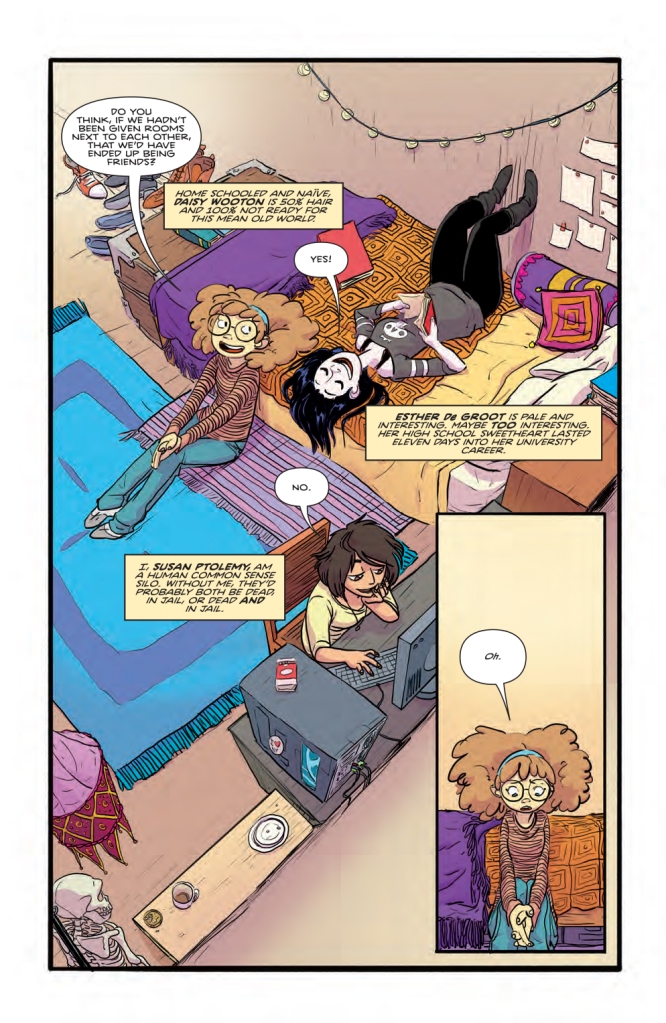 Summarizing Giant Days fills me with pleasure because, while there are a few small ongoing threads (which thankfully carry over from the original self-published work, itself summarized on the first two pages of the Boom! Box #1), Allison rejects arcs in favor of complete stand-alone stories. The setting is a large university in England, and the three protagonists are young women, just past or on the verge of 18, who meet during their first week of school and become the closest of friends. Daisy Wooton is so intelligent she skipped a couple grades, but she was also raised by her grandmother in the tiniest provincial town and has a lot to learn about real life. Esther de Groot was the head girl of her public school, but her intelligence can be subsumed by her flair for drama and excitement, qualities her considerable beauty helps along. And Susan Ptolemy is the “human common sense silo,” a practical soul who got into college through extra-hard work, and who mixes a running stream of good advice with a readiness to fight and bend the rules in the name of righteousness. Their physical appearances are as different as their personalities.

All this being said, one of the joys of Giant Days is that Allison has never needed to dwell on their differences in looks, class, perceived social groups as John Hughes would have done: instead, from the first issue, he stresses what the women have in common, and how united each has strengths that make up for the others’ weaknesses and two can lift the spirits of a downtrodden third. Right now in the comics world, much is being said, and necessarily so, of the need for greater diversity, especially in the realm of female characters. While books from Ms. Marvel to Bitch Planet brilliantly rise to fill this duty, most titles are planted firmly in the realms of sci-fi and superhero. Giant Days’s setting and tone makes its depiction of female friendship and solidarity all the more relatable and inspiring.

Allison’s storytelling, in support of this, does not shy away from real issues faced by women (and humanity). The self-published run can be seen as a prologue, with plots detailing the women taking their first steps towards identities away from home and helping Esther deal with a break-up. Allison illustrated these issues himself (more on this later) and the partnership with Treiman seems to have helped free him to concentrate on tackling deeper themes. #3, one of the finest issues, follows what happens when Esther comes in third on a website’s list of “Fresh Meat: The 25 Hottest First Years” and the university does nothing against the creators, prompting Susan to lead a vengeful counterstrike. The issue is an outstanding denouncement of masculine culture and public apathy towards it, but Allison goes a step further by showing how Susan’s near-misandry can be equally unfair. Following issues find Daisy exploring her sexuality for the first time, developing a crush on a female classmate, getting her heart broken, and trying to determine who she is attracted to, a quest treated with the utmost understanding. Finally, Esther and Susan both engage in sexual relations and there is no titillation or condemnation involved. Allison’s empathetic tone makes me eager to see what subjects he will tackle in the future.

Not to say that Giant Days is serious. It’s may be the funniest comic book on the market. Allison has a magisterial gift for dialogue, timing, and one-liners, and he gives each character a distinctive voice. Moreover, he offers the women two superb foils.

Ed Gemmel is a nerdy spirit animal: a shy, funny, more-charming-than-he-thinks literature student who can’t work up the courage to tell Esther he loves her, and who as time goes on reveals a true depth of character and respect. The fifth central figure is a testament to a writer understanding their material. At the conclusion of the self-published stories, Allison created Eryn, who seemed poised to be a series regular. Eryn was funny but came across as much the same person as Susan while lacking Susan’s can-do attitude. For the Boom! Box continuation, Allison abandoned Eryn and replaced her with McGraw, the transfer student with a singular moustache who has a long-standing connection to Susan that gets explained issue by issue. McGraw is the booster rocket of Giant Days, a man of supremely dry wit, resourcefulness, and philosophy in contrast to the ridiculousness of Ed, but who also proves to be a soulful feminist with a chivalric devotion to Susan.

Now a word must be said about Treiman’s art. Allison’s original drawings were charming and suited to the material, but Treiman is a wonder. She builds off the fantastic strokes Allison hinted at in his art—Daisy’s yogic flying and the surreal world of the Black Metal Society—and creates a vibrant world full of every color under the sun and curvy, expressive lines which make people and landscapes want to leap off the page and into your own existence. It is art that transcends reality and simultaneously fits perfectly with the storytelling, capturing the exuberance, the sense of discovery, and yes, the giantness of being out on your own for the first time. Treiman’s art is also integral to the storytelling. Every issue begins with a single-page panel of our heroines in a particular setting, and that setting kicks them into whatever adventure they set out on. If Daisy, Esther, and Susan look comparatively small against the background, by the issue’s end they are in a new setting and looking larger, more dominating. Treiman is also good at recurring motifs in the series as a whole or in particular issues. Esther’s trademark wink is a sign of insanity or bad jokes to come. On a more poignant note, #4 involves two moments, in flashback and the present day, in which Susan and McGraw both express a longing for something from the other, and there are two panels which find them in the same pose but on opposite ends, one extending a hopefulness, the other unsure, deciding. It’s the sort of forethought a great comics artist needs to have. Treiman’s loss is going to be felt, especially since #6, her finale, had a story which finally took the women off campus and put them into a very different locale where their friendship still carries the day…it made me wonder what Treiman could have done with new settings and characters. But I am confident the series will continue in strong hands.

Because at the end of the day, all of the work is a visual translation of Allison’s unfailingly terrific writing, a counterpart to his deep, witty, and eminently empathetic storytelling that respects the importance of everyday problems and celebrates the bonds with others that help us overcome the worries we face every month, every day, every year. Giant Days is tremendous, addictive reading, and I wouldn’t trade my well-worn issues for a Harry Nilsson vinyl reissue and a Magic: The Gathering starter deck.

Photos from Paste and Smart Overcoat.